The Legacy of John and Julia Townsley

For many, many years on the second Saturday of August, the descendants of John and Julia Townsley gather in Knox County in the Appalachians of eastern Kentucky for a family reunion.

The second Saturday of 2017 was the 13th of August. John and Julia left a wonderful legacy for their children. Through the years some have scattered far and wide across this great country, raising families of their own. Others chose to remain in Kentucky, and a few who left returned in later life. Many descendants make this trip annually to reconnect with the roots of their ancestors. Nine states were represented this year.
On Sunday of the reunion weekend a tradition has been to visit the cemetery  where John and Julia were laid to rest, along with three children who did not survive. The cemetery is on top of a mountain and a few fearless and brave souls still make the trek up that treacherous and winding road to pay their respects.
My husband Howard is one of their many grandsons––they are his maternal grandparents. I am saddened that I never had the pleasure of knowing them. As I participated in the family festivities of hugs, laughter, and home-grown foods from gardens scattered around the local hills and valleys, I marveled that this gathering has not failed to meet since the early 80’s when it began.
I wondered what John and Julia would think to witness the family members in attendance out of the one hundred and forty-seven who had or have life because of their sweet union that began over one hundred years ago.
John Anderson Townsley was born in 1888 at Turkey Creek, Kentucky. He married Julia Belle Smith of Hinkle, Kentucky on March 17, 1916. They gave birth to fifteen children, twelve who lived to adulthood. Those twelve children gave their parents thirty-three grandchildren, seventy-one great-grandchildren and forty-three great-great-grandchildren.
Of the twelve children, four have passed on from this world and joined their parents in eternity. Seven of the eight living children are women. One of the sisters has been in a local nursing home for several months, and at the end of the festivities on Saturday, the sisters and a few nieces went to visit. Later, my mother-in-law Eva, told me they gathered around her bed and sang Amazing Grace, and Aunt Bib, as she is called, sung every word. They are devoted to her, and it was a small way to include her in the reunion that she had always attended in the past.
John studied medicine under his father’s supervision, and under the authority of the Health Departments of Knox, Laurel, Bell, Whitley and Clay Counties of Kentucky he delivered eight hundred and seventy-three babies. In the rural area where he lived he was called upon to treat everything from hiccups to skin cancer. He served in the US Army during the First World War and was the Deputy County Clerk of Knox County for thirty-four years. He also cultivated the family farm, growing tobacco and sugar cane, while being Pop to his twelve children. John was a busy man!
Julia was a loving mother to her children and a loving wife to her husband.  The home-place was her nest where she grew a large garden, harvesting vegetables to can in half gallon jars stowed in the root cellar under the house. It was enough to feed their large family of fourteen, as well as sharing with hungry neighbors. The cow provided milk, the chickens provided eggs and hogs provided the bacon, all these things were the mainstay of feeding the family.
My mother-in-law Eva reminisces about climbing the hill behind the house to get the cow and bring her down for the night. And I’m sure she, along with her siblings, did a lot of milking that cow as well as working in the garden and gathering eggs.
I know many families in my home state of Arkansas who grew up in large families and had a similar life. God is the master designer of the family and knowing and appreciating your lineage is a beautiful thing to be celebrated. The Townsley family know that, and celebrate every year on the second Saturday of August! 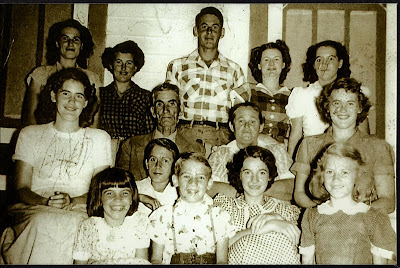