Psalm 133:1  How good and pleasant it is when brothers live together in harmony. 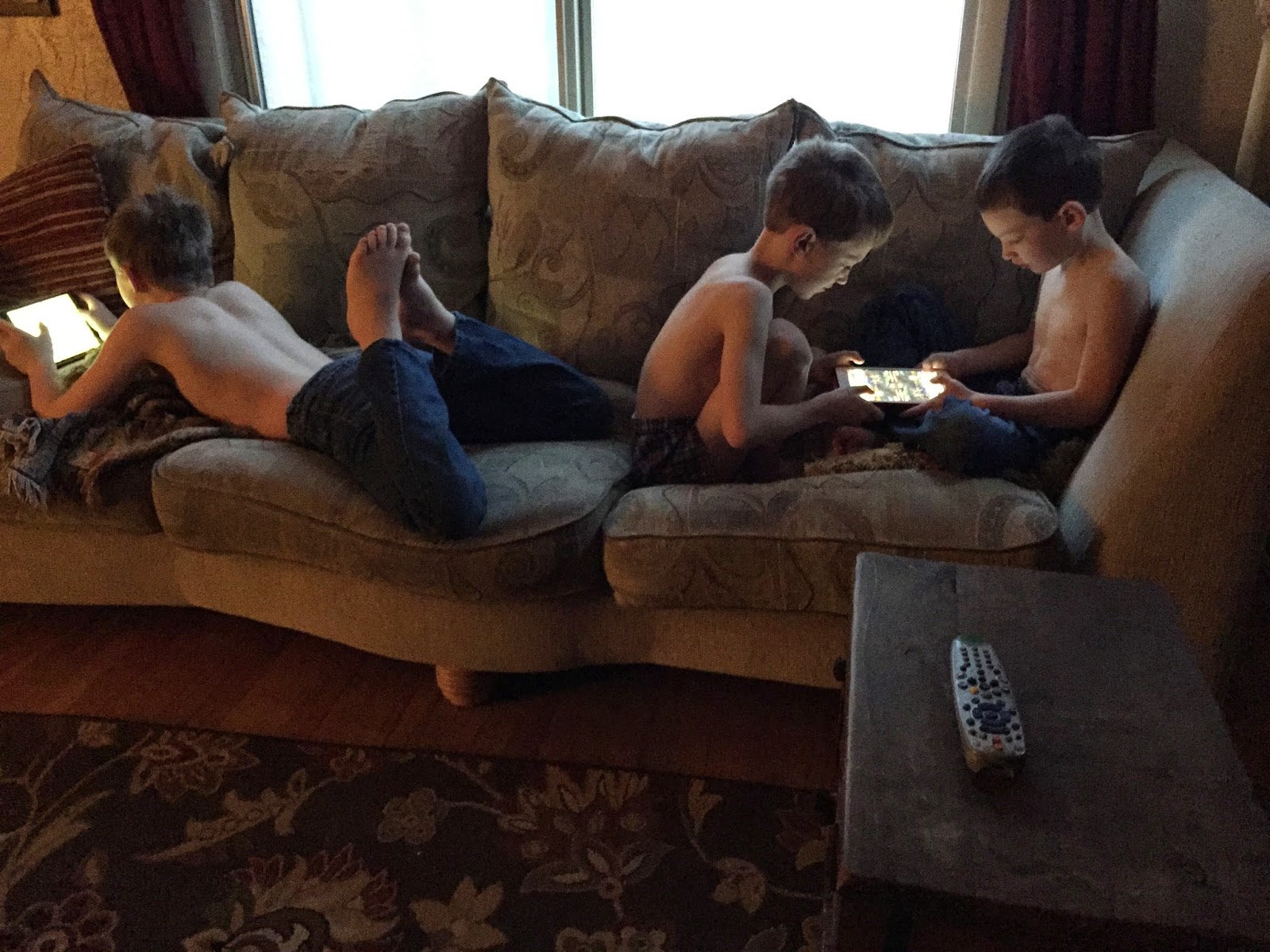 Brothers in harmony.  Is that an impossible concept?  We are currently living in a house with four brothers.  Three of them share a bedroom connected to our bedroom via a bathroom. Their ages are six, eight and eleven. Sharing a bathroom with three boys, who can't seem to aim straight, caused me to gross out a few times, until I remembered to always check the toilet seat! When our toothpaste tube looked like we had run over it with the car several times, we made sure they had their own, and I hid ours high up on a shelf. We had to have a serious talk when our dental floss went missing and I found it in the toys, being used like string. And then there was the time the six year old told me he had a nose bleed.  Of course, when I saw the bloody rolled up tissue sticking out of his nostril and dried blood on both hands, I could indeed see he had a bloody nose.  I went into the bathroom where he'd been trying to stop the bleeding and it looked as though he'd just slain a small animal.  How he managed to have blood splatters on the mirror, I have yet to figure out.
But this is not about harmony between these three boys and their Nana, it's about harmony among the three of them. We've been here in their home almost four months, and even though they are my grandsons, they've always lived in Colorado and we've lived in Virginia.  So our visits with them have always been brief.  But their mother's illness and her inability to care for them on a day to day basis is the reason we are here. Over the last few months I've gotten to know them intimately. Their personalities have emerged and they've surprised me on many occasions.
Do they argue?  Do they fight?  Do they hit?  Do they call each other names? Are they boys?????
Of course, they do all these things.  But they also love.  They love each other immensely. They wouldn't admit that, but it's true.  I've witnessed it.
The first time I saw that brotherly love was in the middle of the night when they woke me up because the youngest was in the bathroom, crying from the pain of a toothache. The two oldest were trying to console him with a wet washcloth because he'd cried so hard he was about to throw up. I took over and told them to go back to bed.  I gave him pain medicine and stayed with him until he went back to sleep.  But his brothers kept asking if he was okay. They might want to kill him during the day, but when he needed help in the middle of the night, they were by his side.
The two youngest recently had the flu.  They were quarantined in the downstairs (basement) rooms to prevent the spread of the virus. They fought very little those five days, as if they knew that each other was all they had. But when the fevers subsided, so did the harmony.
When one of them gets in trouble, sometimes one of the others will either defend or try to take some of the blame. They will knock each other around, but they don't want anyone else to.
Since we have been their primary caregivers and our bedroom is adjoining theirs, I have been awakened at night on several occasions.  The toothache incident was the first and happened two nights in a row.  A trip to the dentist solved that problem.  The youngest was the first to wake up in the middle of the night with a fever.  After three nights of getting up, he was finally better, but his brother became sick.  A few days after the flu episode, the eight year old woke me up crying with leg cramps.  The last time was a couple of nights ago when the youngest woke me up because his brother was in the bathroom with a nose bleed.  When I came back to my bed, after calming them down and back to sleep, I couldn't sleep.  Lying in bed with insomnia, I began to think about all the times these little boys had needed help during the night.  Not once did they come in our room and wake up their Papaw. They first tried to remedy the situation together, and when that didn't work, they came for Nana.
God made little boys to know that Moms and Nanas are nurturers, soft and with quiet words of reassurance that all will be better.  They can be hellions during the day, but turn into needy little boys in the dark of night when something hurts.
These three boys have an older brother who is eighteen and in college.  They adore him, and he loves them and is very possessive and protective toward them. He completes this band of brothers. They are all extremely smart and very good students. I don't know what the future holds for each of them, but I know who holds their futures, and I have to trust that all will be well. They are yours Heavenly Father, keep them close. 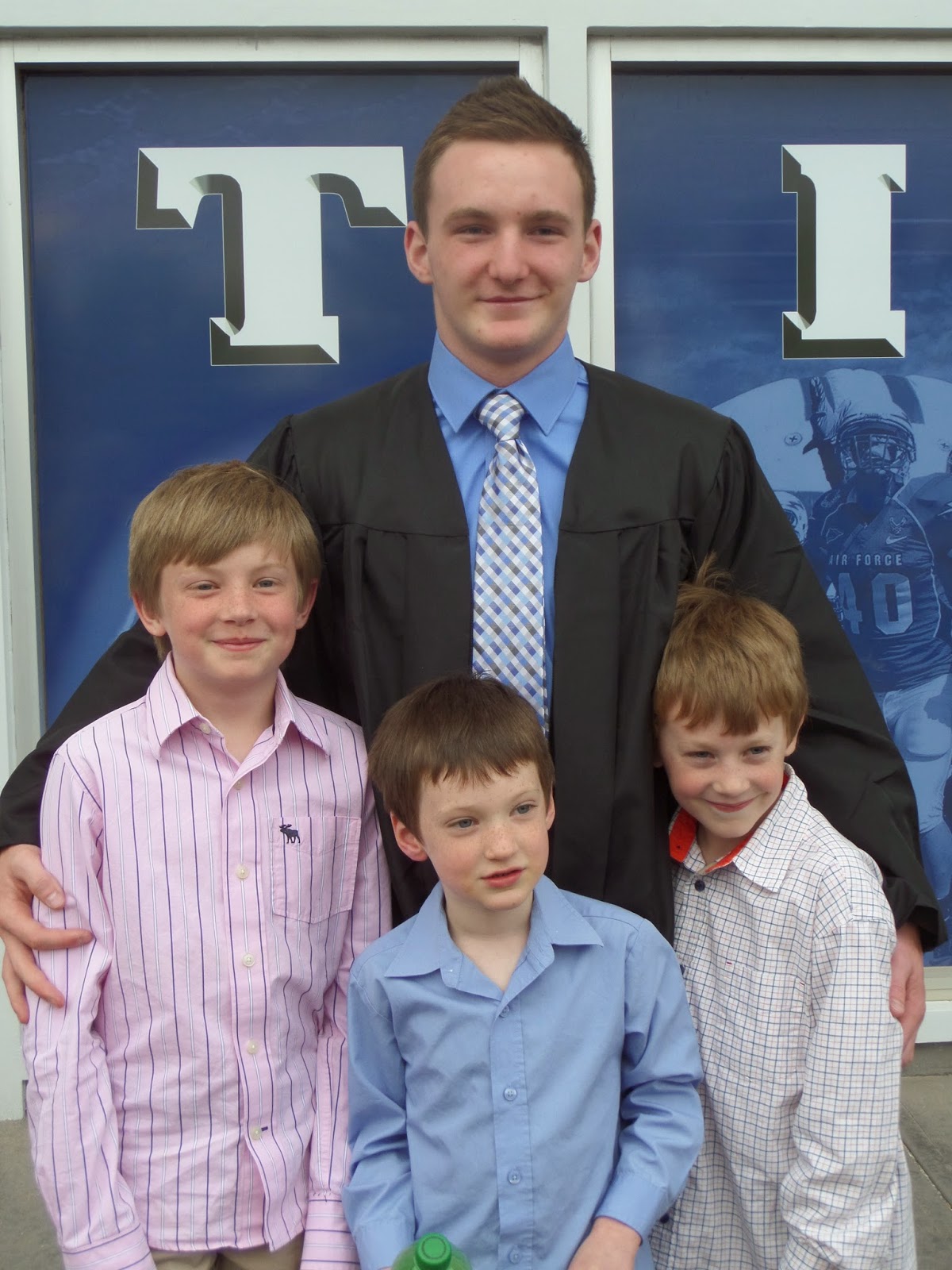 Posted by Linda Dunlap Hulen at 8:46 PM No comments: