Friends of all Ages

Deuteronomy 11:18-20 Imprint these words of mine on your hearts and minds, bind them as a sign on your hands, and let them be a symbol on your foreheads.  Teach them to your children, talking about them when you sit in your house and when you walk along the road, when you lie down and when you get up. Write them on the doorposts of your house and on your gates.

My youngest friend is only seventeen, and the oldest, who recently passed away, was ninety-one. True friends can be any age.  It is the connection, the hearts of two people that seem to know each other, that creates a solid, long term relationship. Everyone has acquaintances, people you've known for years that you might consider to be your friends. But a true friend will jump in the trenches with you, listen and then be brutally honest.
Sometimes a good, long phone conversation can cure the ills of the world, or at least our own personal world. Last night was such a time.  A young mom of four who has been a friend for a few years texted me with a message that a return text wouldn't suffice. So a long phone conversation ensued.
When we are in the trenches, and sometimes they do feel like war trenches, where we hunker down and hope the fighting we hear in the next room will miraculously stop, but it doesn't and we are coming undone, then we just need to vent. A two-year old toddler can overwhelm two adults with lightening speed, leaving the parents to question their abilities to see this little person through to adulthood. And when that toddler has siblings at other stages of development, the parents began to feel that everything they are doing is WRONG!
Since I don't have answers to most situations, I listen and I share.  And I remember. Once when my boys were ages one and four, they were sick, really sick.  For days all I did was hold one or both of them.  My house was in shambles, I was in shambles and I remember thinking I would not survive. I did.
She shared some of her stories and told me how she felt she wasn't doing things right, worried about making mistakes that would scar her children in the future. So I told other stories, things that happened a long time ago, things I said or did to my children that can still haunt me today. As we talked we began to laugh which is sometimes the best medicine.
But, she said, your kids are successful adults with wonderful families, you must have done something right.  I did, I said! I prayed and I asked God to fill in the spaces that I left blank.  To give them grace in the places where I failed to teach them the right way. To give them strength in the places where I'd been weak.  We are human, we aren't going to get it right every time.
My friend had stolen an hour away from her family to have a much needed talk.  But I could hear the children, they'd found her, she had to go back to her present day life with her precious husband and family. Hopefully, with strength and hope restored to face another day fulfilling the most important calling in the world, motherhood.
My memories were tucked away and I returned to my husband in the home we share where there are now empty bedrooms. But our conversation had helped me too.  As I told some of my own worries and stories from long ago, I realized something I've always known, but too often forget, God answers prayer.  He did fill in the blanks  And, He will fill in the empty spaces for her too.
Posted by Linda Dunlap Hulen at 7:39 AM 1 comment:

Psalm 34:4 I sought the Lord and He answered me and delivered me from all my fears.
The necessity of God's intervention to experience freedom, both from imminent, life threatening dangers and from terrors produced by the imagination when all one's senses must be kept on constant alert to dangers lurking around every corner. (taken from the Holman's Study Bible for Women)

I have been involved with the MOPS program at the Heights Baptist Church as a mentor for several years. For those who aren't familiar with MOPS, it is an international organization and the acronym stands for Moms of Preschoolers.  It was started in 1973 by a group of moms who needed each other to lend their own experiences and support as they raised and nurtured their babies and pre-schoolers. A place where they could land softly when the stresses of motherhood became too much to bear alone.  And sometimes a place where they could also share their fears.  And fear has prompted this post today.
Our MOPS group has a facebook page that is very helpful to find a multitude of things needed in this journey through the landmine called parenting. Yesterday there was great discussion on allowing your child to play freely in their neighborhood without  parental surpervision.  The discussion was polite and very understanding of everyone's views.  I wasn't surprised, because we have some of the brightest, loving, understanding and Christ following moms you will want to meet.  The conversation ranged from a few who allowed their kids to play in their cul-de-sac with others, to a few that won't let them out of their sight, for several reasons.  Some reasons were because they lived on a busy street, or their children were still too young, or the moms weren't quite comfortable with where they lived. Some of the moms who were comfortable with not being present was because of where they lived or that they had a large fenced in backyard, etc.
My job as a mentor is to listen, sometimes offer advice (when asked), support and share from my own experiences as a mom. I try to stay involved, and facebook offers me a glimpse into their lives outside of our meetings.  When a conversation occurs such as the one yesterday, I am interested and sometimes concerned with the issues they are dealing with on a daily basis.  When I went to bed last night I couldn't stop thinking about everything I read about the fear of losing a child.
Since I grew up in a very different era and also raised my own children many years ago I always try to think about the differences. I lived in a small town as a child and raised my own children in that same place. Were there registered sex offenders then? No, they weren't registered, but they were there.  Did child abductions occur then?  Sure they did, but if it didn't happen in your town or close by you never heard about it. The difference I think is the media.  I researched child abductions and before there is criticism about what I am about to say, I know, I know, not everything you read on the internet is true!  However, I've heard this before and if you pay attention to the news when an abduction occurs, most of the time it is a parent or a relative who has absconded the child.  When I hear about a child abduction, right or wrong, I sigh with relief when I find out it was a parent or family member.  So, how do I feel about this issue?  A little sad.  I think about the freedoms I enjoyed growing up and that my own children also experienced the feeling of safety as they played with the neighborhood kids. It's another individual decision that parents have to make for their own children. My only advice would be to be aware of sensationalism from our news sources.  After all, they are out to make money and they very rarely come back and admit they were either wrong or they added into the story what they think, not what had really happened. And pray, for relief from fear and for discernment.  I sure do love my MOPS Moms!  Note: I realize abduction is not the only issue, could be bullying and many other things.
Posted by Linda Dunlap Hulen at 7:23 AM No comments:

Psalm 139:16 Your eyes saw me when I was formless; all my days were written in Your book and planned before a single one of them began.


Welcome to my blog!  I confess I'm a wanna-be writer.  I've loved the printed word since I began learning to read.  For years I've been an avid reader, and the passion for the rest of the story can seriously interrupt my life, until the last page of the book is turned.
Six years ago I began writing a book about my parents.  Their love story had been tucked deep inside my heart for many, many years.  I yearned for the opportunity to tell about the life they shared to a really good author, maybe Nicholas Sparks, and watch him work his magic into a riveting book and possibly a movie, so the rest of the world could know what I knew.  But, successful authors are hard to reach!
So I knew if their story was told, it was up to me to do the telling.  Where do I begin?  How do I do this?  This thing I want to do...to tell the world about the two people who gave me life.  I began to pull to the surface the memories, some happy and some painful, written in black ink on stark white paper and bound into a book that I was bold enough to share with others.  What would they say after they read it?  Had I been capable of explaining what I felt?  Then would they know what I knew?
My book, Her Final Gift, was the result of four years of struggle and yes, sometimes tears, to tell the love story of Harmon and Eula Dunlap. It was gratifying to see it in print, and know that their story in book form was resting on bookshelves in many homes all across America. No, it didn't make the New York Times bestseller list, but it did touch many hearts. 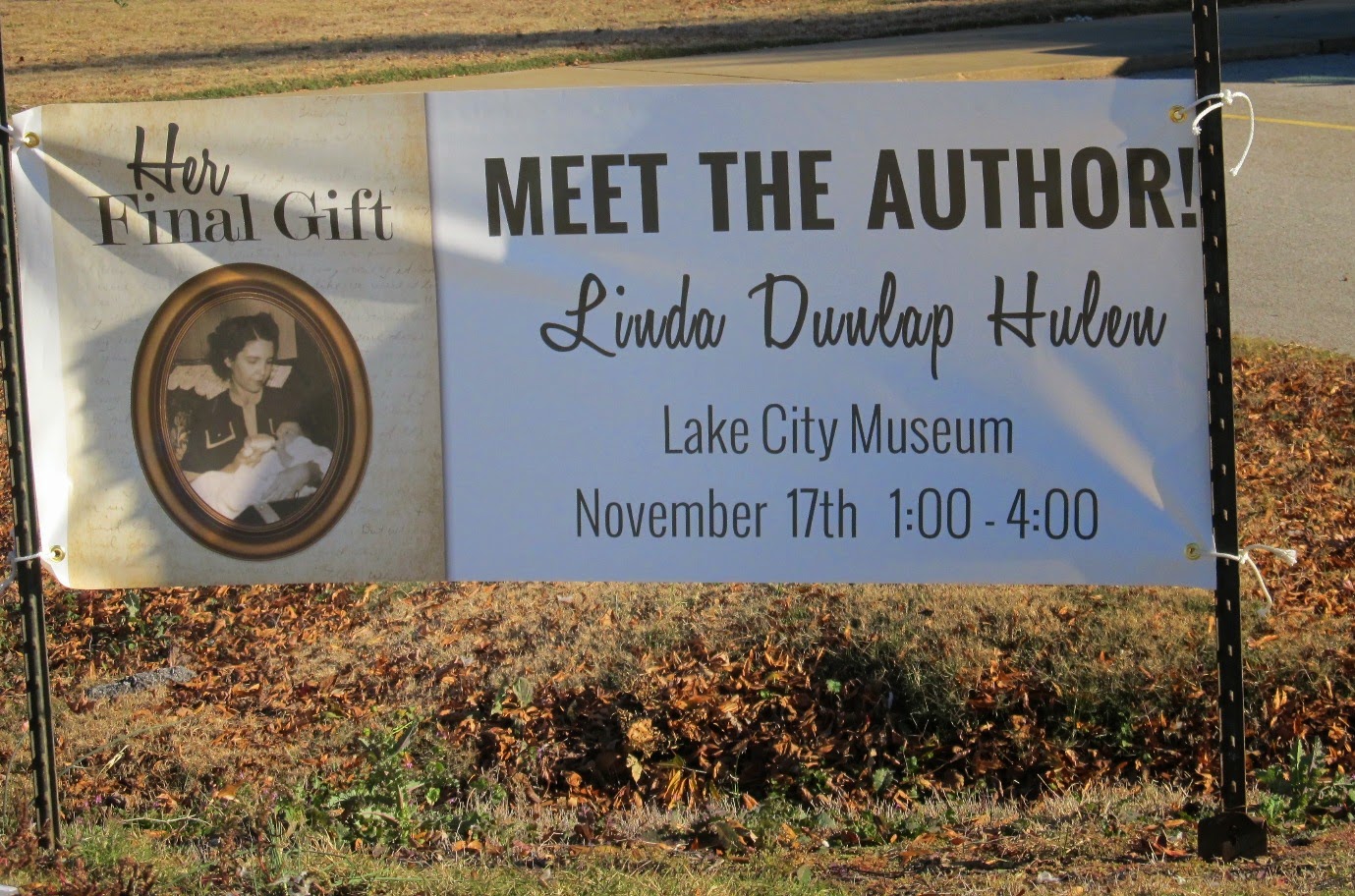 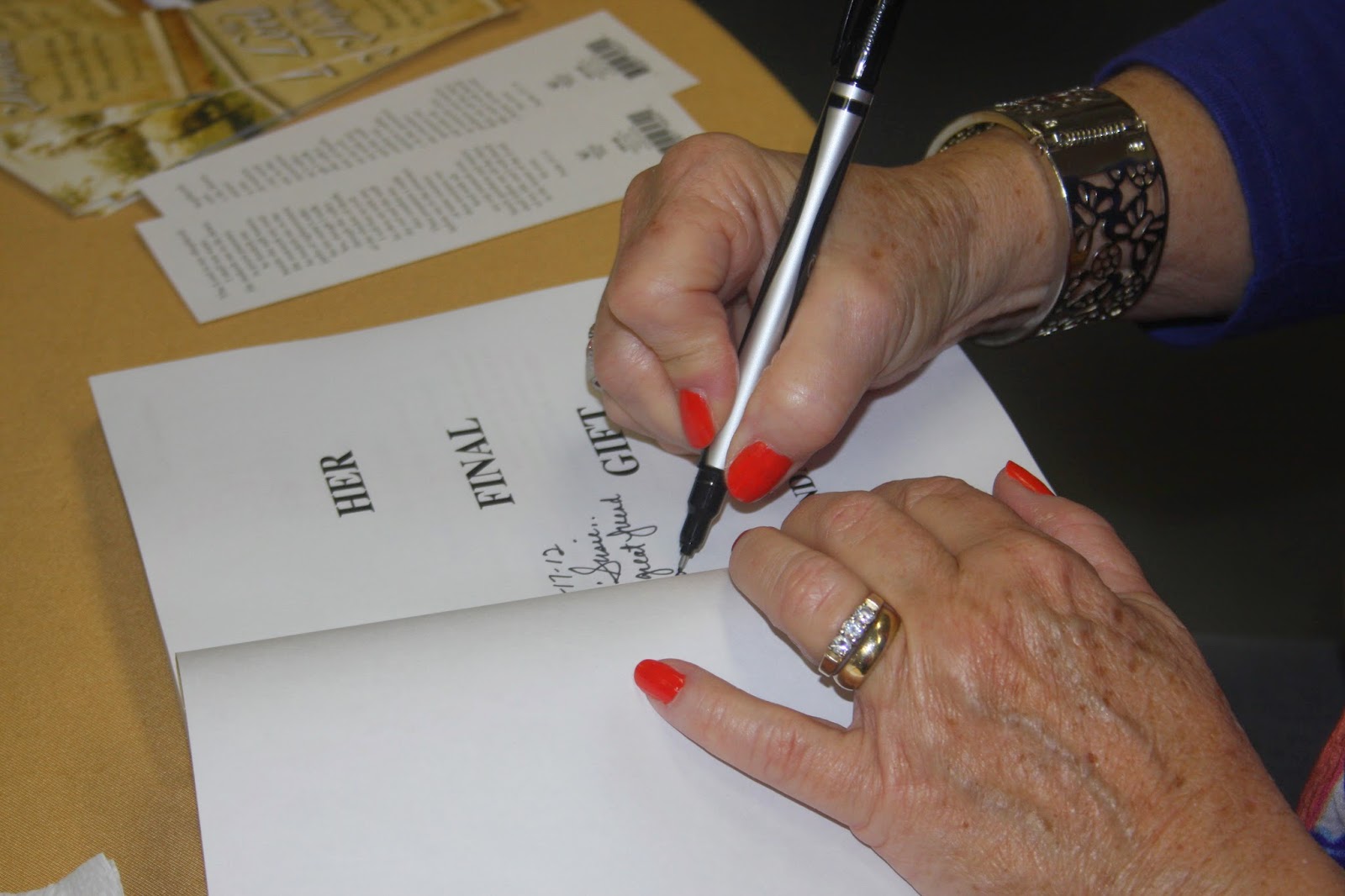 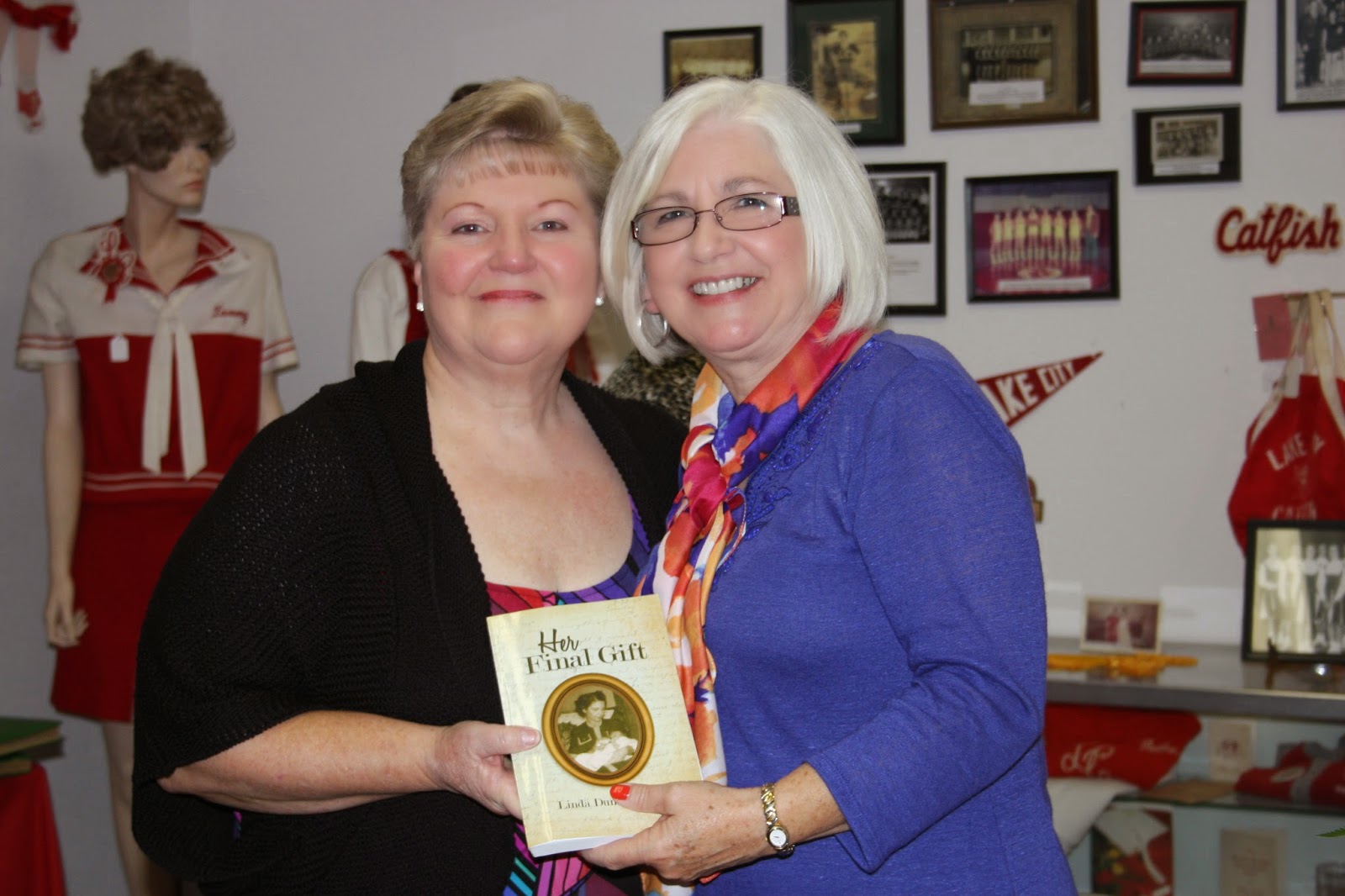 Read more »
Posted by Linda Dunlap Hulen at 10:42 AM No comments: